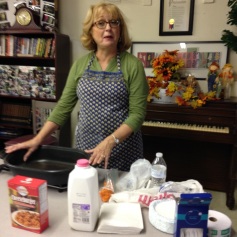 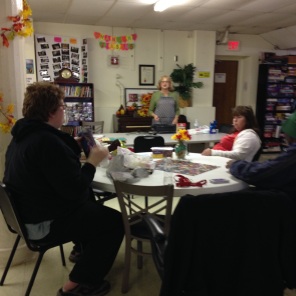 CUP was thrilled to present 13 people with skillets at today’s Cooking with CUP demonstration. CUP director Mary Stepleton showed participants how to make a tasty dish using ingredients that they could get at the food pantry.

The skillets were donated by people who attend the churches that support CUP and by CUP’s Facebook supporters. This was the first time CUP has done this type of event, and Mary Stepleton characterized it as being “like Christmas” for the people involved in it. The event was part of the daily events scheduled throughout October by the mental health and homeless support organization Changing Seasons to draw attention to the plight of the unemployed and homeless in Lima.

Many thanks to everyone who donated–you’ve made someone’s supper much better!

To Get Food From CUP

For a three day supply of food, come to CUP during our posted hours with the
following documents:

--A picture ID
--Proof of residence (utility bill or
something similar)
Note: CUP clients must wait 30 days between visits to the pantry. However, clients may come each Thursday during produce season to get fresh produce.

Our hours are posted on the calendar on this site and also are available on our recorded telephone announcement at 419-221-3243. Hours vary, so sure to check!